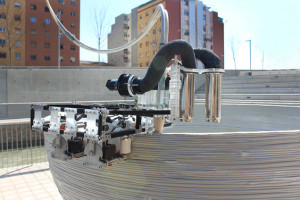 Big Potential in a Small Package

While the potential for 3D printing is vast, there have always been certain limitations, specifically the fact that the size of the printed object is limited to the size of the machine. With a recent innovation, however, the sky for 3D printing may truly be the limit. Engineers at the Institute for Advanced Architecture of Catalonia have discovered a way to enlist a group of small robots to work together to print large items that would have previously seemed impossible, even constructing full-sized buildings.

In order to create these massive structures, the robots, known as Minibuilders, are designed to work together, each performing its own unique task. This division of labor and the fact that 3D printed structures don’t require expensive support structures, means that 3D printed buildings can be produced in a more energy-efficient, green friendly manner that is also more cost-effective than traditional construction methods.

According to Adele Peters of Fast Company, the process begins with robots who, as part of a team, essentially squirt out the required material, which will harden and form the basic structure of the building. Initially, a group of foundation robots work together to create the initial layers of the building. Then, the grip robots are brought in to create additional layers, including the ceilings, windows, frames, doors, and any other components of the building frame itself. The process is completed with the help of vacuum robots, which are designed to add one final layer that works to reinforce the entire structure.

To see this amazing invention for yourself, check out this video of the little guys on the job.

In an effort to make these robots as functional as possible, the designers of the machines have enlisted the tenets of open source by releasing the designs to the public. This way, other mechanically-inclined minds can add their own thought sand ideas, possibly leading to an even more efficient swarm of tiny construction robots creating the cities of the future.